As we approach the much lauded Jupiter - Saturn conjunction in Aquarius, beginning a new cycle of conjunctions in air signs, we find ourselves once more perched upon a hedge between worlds. This conjunction will occur as the Sun enters the point of Winter Solstice found at 0 degrees Capricorn on the Tropical Zodiac for the Northern Hemisphere. Solstice and Equinoctial points have long been considered liminal zones marking the changing of the seasons as well as important religious festivals. Jupiter and Saturn conjoining at this time is not to be taken lightly, as it signals both the depth of a cycle reached as well as the pregnant possibility of new heights to come.
...For this year has been quite the lengthy night lived and unlived - a trailing death stained cloak grotesquely unfurled behind our collective visage - yet we look onward. This point of Winter Solstice is often just that. Reflection in two directions. The longest day becomes the longest night. From the perspective of agricultural cycles we have harvested what we have harvested and live on such nourishments until the soil is ripe once more. Is it enough?
Perhaps we are familiar with these Winter symbols. Saturnalia: the slaves become the masters, masters become slaves. The whitening of the land begins to bleach our differences in class and creed; death, the great equalizer. As the Neo Platonists described it, this Gate of the Gods is the dwelling place of the immortals; along with Cancer, an axis of death and resurrection as the Great Solar Christ is born under a glimmering star. We must not forget that the constellation Capricorn, which gives us much of said symbolism, is double bodied in nature. The greatest heights and mountain tops climbed by our nimble goat and the lower oceanic depths plumbed by the fluttering fish. As described by Austin Coppock in 36 Faces, this is the realm of the Headless God. 'The One Who Sees Through the Feet.' And the stones beneath us are very much aware, and from them our skeletons are borne and do return. 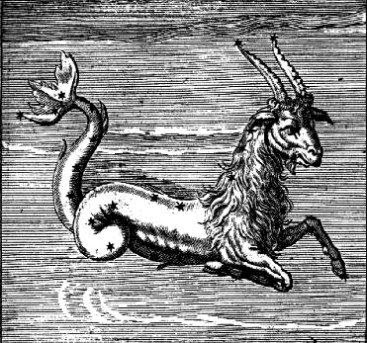 Yet what of the Moon and her time scales? The Winter Solstice marks the Sun's exit from the 21st Mansion, Al Balda (The City, The Empty Place), into the 22nd Mansion, Sa'ad al Dabi (The Luck or Fortune of the Slaughterers). Leaving the sidereal zodiac aside for the time being, the tropical lunar mansions somewhat align with the symbols previously mentioned. Ibn Arabi calls Al Balda 'The Death Giver,' reasserting a mark of termination in this part of the sky. The Arabic letter associated with this Mansion is ش (sheen). This letter is the shushing motion of initiating silence, a cosmic inferno engulfing the various layers of dross. On the other side of this starry crematory we encounter the immutable philosopher's stone, a mercurial mansion, ever alchemized, the resplendent jewel. The twenty second mansion is thought to be of 'minerals, and metals' according to Ibn Arabi. The most mysterious Nakshatra in the Vedic lunar zodiac, Abhijat - birthplace of Krishna -, residing in the liminal space between. Associated with both the constellation of the Lyre as well as Vega, here we see connections with the falling eagle and underworld journeying figures like Orpheus; the radiant stone, the jewel in Lucifer's crown, the key to the realm of the immortals. Just as Vega was once a pole star, we see this part of the sky as being inhabited by fallen angels who seek to return to their former axial position. Concretized in matter spirit has forgotten the heights to which it had once soared. Now, it waits to be charmed as the serpent from the basket; glory contained only to be reinvigorated by a long lost charm.

Al Balda is seen as a Janus faced mansion, that is two faced. Our double bodied water-goat is not dissimilar, as one face looks back upon an archaic past found dwelling in the oceanic depths, and the other, with an ambitious gaze towards the mountains of the ensuing generations. The treasures which await in the following mansions ask us to collapse these faces into a circular gaze. As the Headless God may teach us, 'to see through the feet.' Similarly, the serpent's tongue begs the same question, for if we come upon it without preparation we may easily fall prey to its venom lubricated kiss; perhaps in spite of so many Edenic whisperings and songs. The fact is that this Winter Solstice has indeed poised us upon the greatest of two headed opportunities. From our present vantage point both directions seem to lead nowhere. In a demonic reversal of the آیة النور (Surah 24, Light, Holy Quran), our two heads are mired in 'darkness upon darkness;' fitting for the winter solstice as the point of Longest Night. 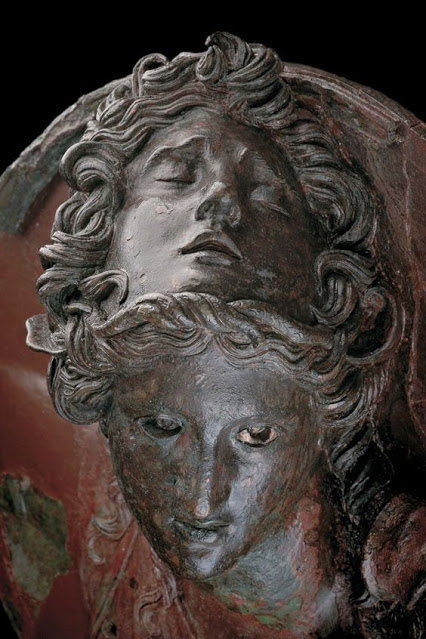 Heightened solar drama notwithstanding we are still speaking of a solstice point. Though the presence of the Sun moving through lunar pathways is not entirely incidental we would be remiss in not discussing the movement of the Moon at this critical junction. So, as these words are being spoken on the thirteenth of December, we are reminded of the Christian Martyr Lucia and her vision set upon the disc. Luna is nearing conjunction with the Sun, a blinding of her light, the removal of the physical eye. The temporary death induced by a novel Moon is one more reminder of a state of darkness in this process of necessity. Darkness upon darkness, and yet, an opportunity for renewed vision. Lucia, or Light itself, is not limited to the niches of our skull; her eyes upon the plate as if an offering to be consumed by those who seek a greater vision.

The conjunction at hand will trigger a solar eclipse on December 14th as the Moon conjoins the Sun on the lunar southern node, or the tail of the dragon. Once more, we see a luminary obscured in darkness as the solar eye becomes consumed and inevitably digested by the Great Dragon. Consistent with the themes of the Winter Solstice we see our brightened dreams reduced to a kind of excrement. Creative / Destruction, on and on.. as the Sun's fire is reduced to ash, squeezed through the reptilian gullet to emerge as carbon for our future fires. Such is the valuable material for our survival through winters to come.

Our two luminaries, Sun and Moon, spectacles of sky, ever so close and both approaching darkness. As the Sun reaches Longest Night the Moon has already sensed a glimmering as she begins to wax. Curiously enough, her movement through the Lunar Mansions will be reflecting the Sun's journey in a variety of ways. Having just passed through Mansion 26 & 27, the more official crematory funeral cot of the sky, Luna has been reduced to ash as her spirit awaits rebirth. On the Winter Solstice proper the Moon will move between the final mansion and begin anew just beyond the 0 degree of Aries into Mansion number 1. The 28th Mansion, Al Risa or Batn al Hut, is the final swim of countless spermatozoon towards the sheltered rest within the great cosmic egg. Here we have Jonah swallowed by the whale, taken to the sea, uncertain of his return. Mirroring a water vessel, the curved lips of the fish will speak prophecy from the interior. The coming of a new being. A rebirth of sorts. As the Moon moves into the 1st Mansion, Al Sharatain, on the other side of the solstice, we are reminded of the Pen, Al Qalam, which explicates the axial forms upon the horizon. Marking hieroglyphics from unknown worlds, the Moon has brought something of the darkness into the growing light. A contrast, if you will, so we may decipher these signs of things to come with discernible shapes and patterns.

In this way we would not be wrong in discussing the challenges of our present moment. To discuss the Moon is to discuss context. To discuss the Moon is to discuss the cycles of generation. Our plague ridden minds consumed by such forces as those who fester in the darker corners of the world, are very much preoccupied by the nagging context of the moon. Bursting magnitudes of violent bacteria, yes. Vitamin deficient interior dwellers rotting away in excessive proximity to the domestic, yes. Nagging context.
So, in the spirit of a little clarity, what does the Long Night have in common with the Moon and her byways in time? Yes, context is one. The Sun changes little in the life of the sky. In fact, this present eclipse speaks to both the scarcity of change as well as demanding our presence in this moment. The Moon waxes and wanes quite often. Her archaic images are reminders of a subtle time, a time in which creatures may stir as well as those who we shall not name from times we no longer speak of. Let us not forget that she is the luminary of the Night and so holds the title by her very nature. Context of the night.
Beyond this, and perhaps more importantly, the paths of the Moon may lead us to the realm of the stars; our sacred stories, our birthrights, and the underworld. It is her subtle light that leaves the space for our many other suns, our signs of gravity and the light of other worlds. It is the context of Night, yes, but it is her gentle light which lets us see the Others ever present and ever near.
The Longest Night will be presided over by the Moon as the Moon will be presided over by the Longest Night. And we will know them by star light. Our weakened Sun, constrained by a sable and starry eyelid, yields to the forms of the Moonlit night which take precedent. This night is so much more than just a point within the Sun's journey. It is a place, a presence, and opening to the stories and sounds of the stars who become visible. Among the veil of night their songs become audible. The howls of creatures human and not, goetia, lamentations, and a sidereal picture show of necromantic star lights, notations marked by composers long departed, become the symphony of this night, ever longing, conducted by the Moon's majestic splendor. Let us not forget the Winter Solstice nakshatra, Uttara Ashadha, governed in Vedic cosmology by Visvedevas or 'All the Gods;' once more a symphony of voices from darkness to light, given presence, given space, by the Moon's vocation of accumulating magnetic-subtlety. Once more, the Neo Platonic Gate of Gods, or, at the very least, an entranceway to their various stellar forms and manifestations.
The Zodiac of Starlight, the Lunar calendar, would seem to be the palpably superior means of time keeping within this place we call the Longest Night. For it is exactly that, Night. If we can begin to see this cardine, this hinge, as an entrance into and outside of a vision of darkness, we may find ourselves in the presence of said place. To track our encounters, to look for signs upon the myriad paths in this starry forest, becomes an acclimatizing process to its terrain. If we are to become lost upon this journey, or heaven and hell forbid we become all too found, the Moon and stars become our guides from whence we came and to where, and however far, we shall go. 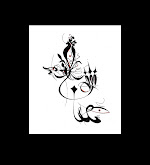 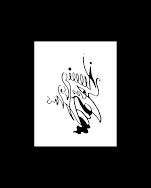